We design architecture for all: inclusive, barrier free and participatory

On Monday night, whilst Greta was tucked up in bed, Bee, Ian and I went along to the Edinburgh Architectural Association awards ceremony, more nervous than if it had been the Oscars (though less dressy, apart from Bee). The EAA awards  are a really important event, as they are local judges, with an understanding of local issues, but also a wider architectural experience too. Their visit was delightful (even though they had to tiptoe round Bee who was in bed with a fever) as there seemed to be a real sense of amazement on their faces as the house unravelled, to be something very different from its initial appearance. I also think with our house there is a certain disbelief that anyone would really base their home around a 28m long ramp, but needs must, and hopefully they were convinced that however ‘idiosyncratic’ the house was, it works. So we were left with a feeling that they had really understood and appreciated the house, and were absolutely delighted to be shortlisted. But that didn’t matter as Iain Stweart stood on the platform with his (metaphorical) gold envelope. It was encouraging that as our image of the back of the house (link) went up on the screen,  there was an audible gasp, and then several moments of deafness as we couldn’t quite believe that they had read out our names. Bee was the first to jump up and exclaim with delight and then we all piled onto the stage, a quick mention of where the fourth client was (well past her bedtime), no time to think about thanking the many people who have helped us along the way, and definitely no tears – we had been warned by the President!

There was a real sense that the awards are just as much about good clients as good architects, Bee felt well and truly congratulated, the judges said some lovely things about the house, and then it was back to the reality of finishing floors, un-jamming stuck windows, and painting huge areas of walls. It is however a wonderful feeling to be an award winning practice living in an award winning house. And on our way into school with Greta this morning, atleast three people greeted us as such, the delights of living in the friendly, warm community that is Portobello. 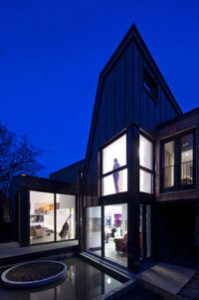